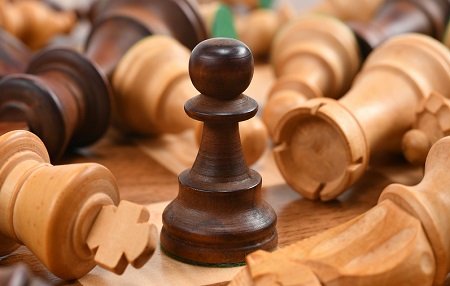 I was once talking with a VP of Sales about their quarter, and they shook their head and said: “We were surprised to lose a deal to that competitor.”

If you don’t have a consistent, organization-wide method to collect, analyze, distill, and then share competitive intelligence, then you are missing a trick.

When we roll out a competitive program, one of our first steps is to conduct a Competitor Analysis, which involves in-depth collection of relevant external and internal data – which includes interviews with internal teams across sales teams, customer success, and marketing.

In this case, we uncovered that marketing had been tracking the SEO activity of this competitor for over a year. Meanwhile, the sales team had seen the competitor increasingly included in RFPs, and more than one salesperson had pitched head-to-head against them.

Talking to your internal teams is the no-brainer of competitive intelligence. You should collect and analyze insight, anecdotes, facts, experiences from inside your organization to complement external research. I’m also going to add that if you’re not interviewing customers and prospects for detailed win/loss reports, then that’s another action point for you.

Good competitive intelligence is about collecting information systematically and consistently – it amazes me that organizations spend tens of thousands of dollars on analyst reports, scroll through endless external review sites, and yet don’t collect information from their own team.

Want some ideas of how to collect insights from your team for competitive intelligence that helps you win sales? Get in touch and let’s talk.

This site uses Akismet to reduce spam. Learn how your comment data is processed.